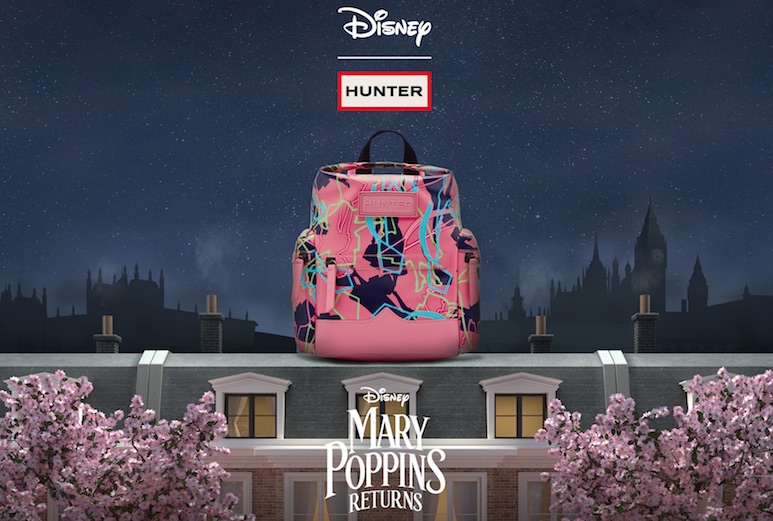 After 54 years the popular Disney figure “Mary Poppins” returns to the canvas. The British company Hunter launches a special collection for the big theatrical release in December, whose designs are based on the dazzling figure.

The Hunter brand was launched in 1856. It has always been known for its boots and as a court supplier to the Queen and Duke of Edinburgh. In 2013 Alasdhair Willis was appointed Creative Director. He introduced two new brand categories: Hunter Original and Hunter Field. Since their launch, the new footwear, outerwear and accessories have been showcased along with the Original Boots from the Hunter Original collection at four shows during London Fashion Week.

Hunter Field is a technical collection designed for outdoor activities in both rural and urban areas. Built on the three principles of protection, intelligence and craftsmanship, the collection follows Hunter’s tradition of pioneering design to create advanced boots for those who perform at their best in any weather and on any terrain. For children, too, the collection is geared to the highest standards of functional features.

What will the Hunter x Mary Poppins collection include?

Inspired by the new film, the collection will feature two imaginative prints that will be on the women’s and children’s boots. In addition, the British company also presents handbags and umbrellas in Disney style. As a highlight, the manufacturer will show the so-called “Gladstone” bag, which is based on the famous bag by Mary Poppins himself.

When will the collection be on sale?

Since 8 November 2018 the products can be purchased in the online shop as well as in selected stores.