Kind + Jugend is not affected by the dampened consumer mood On Sunday, the four-day Kind + Jugend successfully concluded with 24,000 trade visitors from 33 countries. The main visitor countries were the EU states, primarily France and Italy. According to Jörg Schmale, Director of Kind + Jugend, the baby and toddler equipment sector was not affected by the dampened consumer mood due to rising birth rates and increasing prosperity.

At Kind + Jugend, the internationality of exhibitors and visitors rose slightly. The exhibitors were also very satisfied with the decision-making authority of the visitors. “Kind + Jugend once again showed all its lively diversity this year. The demonstrably high competence of the visitors and the enormous internationality of the event are the decisive factors for its great success as the world’s most important business platform for the entire sector,” said Gerald Böse, CEO of Koelnmesse.

According to Jörg Schmale, Director of Kind + Jugend, the foreign share has risen slightly to 77 percent. The main visitor countries were the EU states, above all France and Italy. Fewer visitors were registered from Great Britain. In addition, a high number of visitors from Central and South America were measured, especially from Bolivia, Brazil, Colombia and Peru. The number of visitors from the USA was again very high, as was the number from Asia. Also more visitors from the Middle East came to Cologne.

“The order behavior of the buyers is very much considered by the bank away. Nevertheless, the baby and toddler outfitting industry is generally not yet very worried, since overall there are still rising birth rates and increasing prosperity, which is all too often invested in high-quality equipment for children,” says Schmale.

Winner of the Kids Design Award

The winner of the Kids Design Award is designer Yaara Nusboim from Israel. The Nusboim was awarded for her therapy doll Alma. 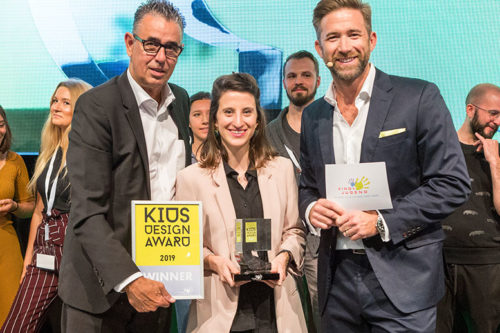 Many innovations were presented at this year’s Kind + Jugend, and e-mobility for prams was one of the top trends.

“The electric pram is coming! This was underlined by this Kind + Jugend. The demand is definitely there, the concepts are convincing. It not only helps with pushing, but also automatically activates the brakes before a possible accident,” says Schmale.

Another focus is on digital products for the children’s room. The special show “The Connected Kidsroom” was intended to familiarise visitors with individual applications and devices. “Electronics can also be found in the child seat, which can be cooled or heated independently, for example. Electronic and digital devices for baby monitoring and care are also increasingly being used in the nursery. There are intelligent developments that enhance the safety and well-being of both children and their parents, such as the first portable ultrasound camera for pregnant mothers or the wristband that simultaneously monitors the baby’s oxygen content, heart rate and temperature,” explains the director of Kind + Jugend.

The topic of sustainability received even more attention at Kind + Jugend thanks to the sustainability initiative in the textile sector. This area is to be further expanded in the future.

At the last edition of the fair, start-ups were given the opportunity for the first time to present themselves at Kind + Jugend at favourable conditions. The start-up area is to be continued next year.

Statements of the exhibitors

“Every single conversation we had at Kind + Jugend went well. There was no hustle and bustle at the fair, so the atmosphere was positive. In addition, our presentation of the new baby room from Steiff by Paidi was very well received by the visitors,” says Christina Pfeil, Head of Marketing & PR at Paidi.

Laure Bertrando, Corporate Communications & PR Manager at Lässig: “Our stand was well attended throughout. We were able to have good discussions with our customers. In the meantime, we have focused on the theme worlds of baby and children’s accessories. Our diaper bags have made us well known, but they are no longer our strongest revenue generators.