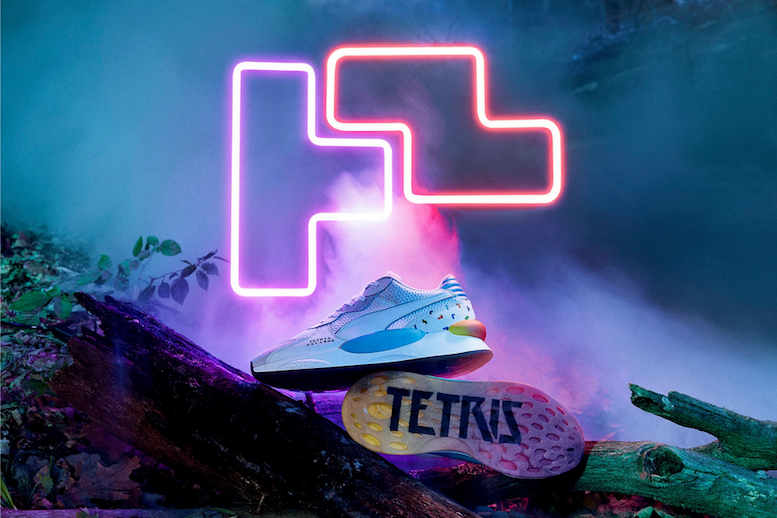 Sportswear label Puma profits from the hype around 80s gaming and launches two sneakers with a visual resemblance to the popular cult game Tetris.

Already in 1984 the puzzled video game of the programmer Alexei Paschitnow celebrated great success. And even today, almost 35 years later, Tetris is regarded as one of the most popular computer games with sales in the millions. This year Puma follows the success of the famous franchise and launches the RS 9.8 and RS-X sneaker models. Not the first clou - already manufacturers like Nike and Adidas benefited from entertainment collections like Pokémon and N64.

The two sneaker models appear in a monochrome palette and are adorned with iconic tetris blocks. In addition, the Tetris logo in 3D adorns the tongue of the shoe, and the “Hard Drop” lettering can be seen on the heel. The RS-X has reflective trimmings. An interplay of futurism and retro. Puma reinvents the classic RS midsole, which in this edition is presented in a form inspired by spaceships. Even though Puma and Tetris come from two different worlds, the manufacturer says: “We do have one target group in common: all the Gamechangers out there who can’t be thrown off course by any setback and never give up.

The collection is now available online as well as in stationary stores and is accompanied by a textile line.

Puma on the advance

Under the leadership of CEO Björn Gulden, Puma has recently established itself as one of the top performers in the sportswear segment and has successfully maintained this position. In 2013 Gulden succeeds Franz Koch and has been managing the company ever since. Björn Gulden has almost 20 years of international experience in various management positions within the sporting goods and footwear industry. From 2000 to 2011, Gulden was managing director of Europe’s largest shoe retailer Deichmann and held various management positions with labels such as Helly Hansen and Adidas.