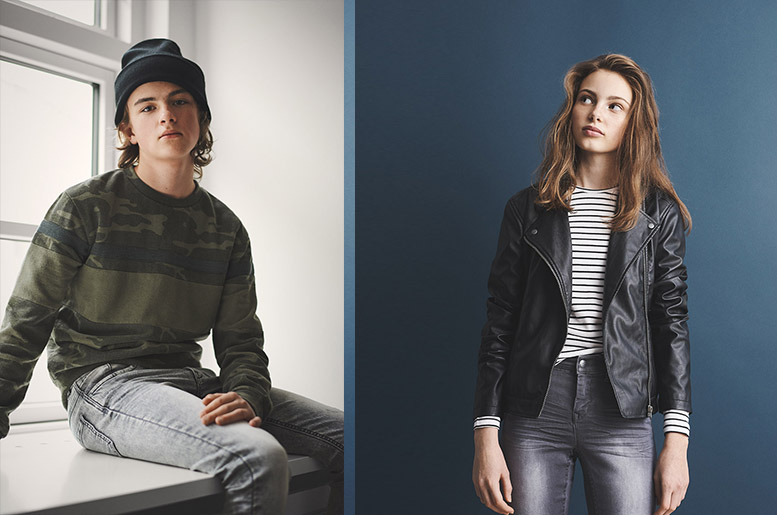 The Digital Natives are a generation characterised by reflection and enlightenment. They move through the world with open eyes. They know what’s happening around them and they approach their environment with empathy. Fashion, for them, is a way to break away from childhood and enter into adult life.

Today, the term “teenager” is hardly used in fashion or sales. Rather, the new term “teens & tweens” gives the segment more meaning and a new value. With this redefinition, a space has been created within the segment that offers the possibility of liberation from old rigid patterns. Teenagers are increasingly a target group to consider and take seriously on their own terms. Boys and girls wants to escape childhood. They don’t want to wear the same clothes as their younger siblings. “Young people today start looking ahead earlier. They look at the trends of the grown-ups,” says Peter Bohlender, CEO and Head of Design at Blue Effect. However, since young adults are still too small to wear the clothes from the Young Fashion sector, manufacturers have to offer them something that creates a transition to the adult world and makes this entry easier.

In the era of globalisation and Digital Natives, a focus on teens and tweens is an overdue necessity. The market for this segment has grown with the constant digitalisation. By adapting to changing needs, a market has emerged which proactively addresses the wishes of these young people and serves them.

Another term for teens and tweens is “inbetweeners”. They stand between two worlds. They don’t feel addressed or understood in either the children’s department or the grown-up fashion world. Members of this target group want to define themselves independently of how their parents feel. This segment includes teenagers and young adults aged between 12 and 25 years old. This large age-span once again underlines the mature nature of the target group. They are connected like no other generation and can be directly influenced by influencers and idols from the digital world. “They are closer to the pulse of the times than the generations before them and they attach great importance to outward appearances. But traditional values ​​such as family and friends also play an enormously important role,” says Vera Steffen, Head of Marketing at ESPRIT on the mentality of these young people. In addition, Steffen emphasises that tendencies towards differentiation and innovation are also to be observed. A growing sense of personal and social responsibility also play a role. “This generation is growing up to critically question things.”

Fascination and respect for the new media

Teens and tweens orient themselves around adult fashion, which they adapt. This is one phenomenon that is supporting the social media channels. Snapchat, Instagram, or Musically serve as platforms of self-presentation, exchange, and trend observation. In this way, the young people can access a constant stream of news and trends, but they are also observed by their peers. The target group is aware of its digital footprints and that the Internet forgets nothing. These young people are therefore particularly critical with every form of staging and with their own appearance. “The teens of today know what is happening around them and they are very enlightened. They are growing up much earlier, reflect on things more, and have broad horizons,” tells Patricia Vergeer, Styling Boys and Lydia Edel, Online marketer from Garcia Jeans.

Thanks to social media, teenagers can go directly to the source to know what look a pop star wore yesterday and what kind of hype this created. They don’t need to take the long route via classic media. The impact is thus faster and much more direct, short-term, and closer to the pulse of the times than classical media can manage. Nevertheless, classical media serve as amplifiers, especially for ​​trends. They tackle themes, highlight them, and make trends suitable for the masses. And conforming is important for teens and tweens, even if it’s just within their own group. Conforming functions as an anchor, which plays a central role as they cut the cord to their parents’ home. Teens are in a phase of growth and self-determination, where they have to make their first important decisions. In addition, they are still torn between the playful world and the cool world. The trick here is finding a good middle ground: “If the trends are too complicated, it becomes difficult for teenagers to combine the pieces well. And a 12-year-old girl is still going to be fascinated by glitter and sequins. However, at this age, it is important not to be uncool within your circle of friends. This is why design here must always tread such a fine line,” says Catarina Czichos, Head of Design at ESPRIT.

If brands and retailers want to win over and sell to teens and tweens, they need to understand this target group. The young adults want their own opinions to be taken seriously and they want to be treated as equals. This is a balancing act for the industry. Brands and retailers have to understand what young people want, but still cater to the tastes of their parents, who are still the decision-makers in most cases. Things are different with trend pieces, which are usually bought with pocket money. But for more costly items, such as coats, the parents will be paying, so the decision is taken jointly. The model and design are often subject to compromise, and are often more to the taste of the mothers as a target group. Although the industry helps itself there because, when young people adopt trends from grown-up fashion, the overlap is much larger.

The A to Z of brands for teens and tweens

Here you will find a summary of the most exciting brands for young adults.